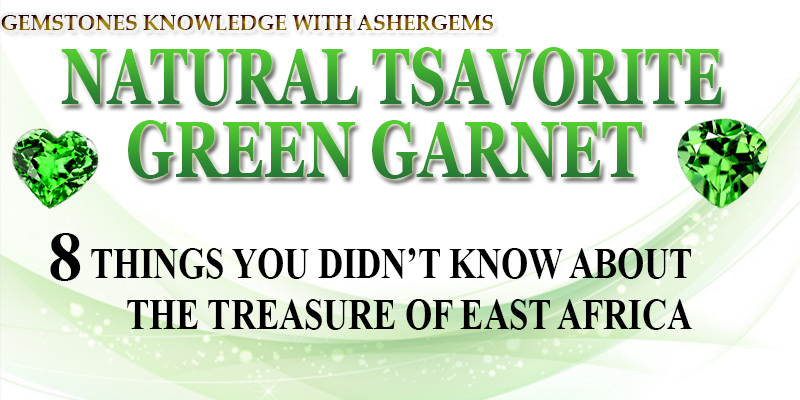 Hidden among the mountains of northeast Tanzania nestled in the Tsavo National Park, a brilliant green gemstone remained hidden for millennia.

Its still-young life in the eyes of jewelry crafters and gem specialists everywhere captures intrigue and imagination alike. What is it about this brilliant green beauty that makes it so special? Let us shed some light on the Tsavorite Garnet!

In 1967, a British geologist Campbell R. Bridges was hunting for gems in Tanzania when he found brilliant green grains and crystals. He later discovered that the crystals were grossularite. They are a member of the garnet family. Upon further digging he found the strata containing the tsavorite garnet stretched all the way across East Africa. These tsavorite garnet had stayed hidden under earth and sea for millions of years.

Finally, in 1974, Tiffany & Co. launched a promotion campaign, spreading the word of the gorgeous garnet’s discovery and introducing the tsavorite into the gemstone industry spotlight.

A garnet is thought to promote self confidence, compassion and success in business. It has long been a symbol of travelers. Tsavorite garnet is believed to have special positive properties. It gives the wearer strength, positive feelings and helps the immune system flushes toxins out of the system.

Traditionally, Garnet is the birthstone of those born in January. However, due to its magnificently rich green color of the tsavorite garnet, it was chosen to be used as an alternate to the emerald. By which originally emerald was the traditional birthstone of May.

5. Bring out the best with right metals.

The tsavorite’s rich green color is brought out well if the stone is paired with the right kind of metal. Both white and yellow metal go well with Tsavorite.

A whopping 325.13 carats was first displayed at the Tucson Gem Show in 2007. It is still considered the largest and cleanest tsavorite garnet in the world. The stone as found near Arusha, Tanzania. In it's rough state, this huge uncut stone was weighed at 185 grams!

It goes without saying, but fine jewelry and the gemstones require special care. Tsavorite garnet is no different.

Tsavorites are typically the most expensive garnets on the market. The highest quality retail tsavorites can demand up to $8,000 per carat. Most stones are less than three carats; a 5-carat tsavorite gem, for example, would be considered very large and exceedingly rare, whereas stones 20 caratsand bigger are considered “world-class.”